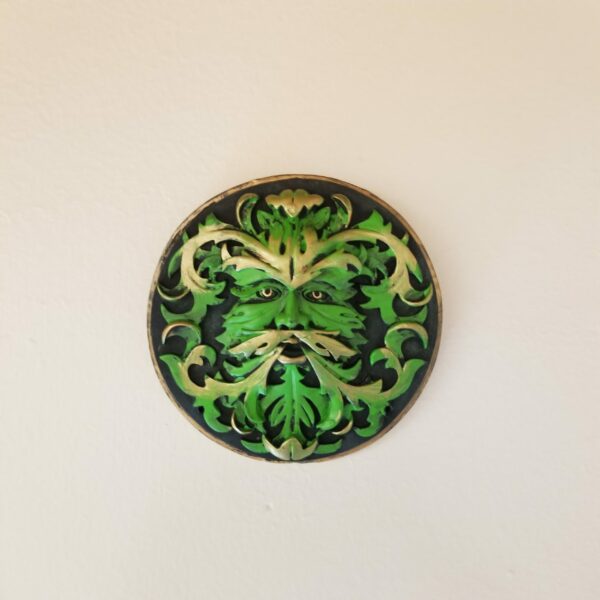 6″ plaque with hanger by Oberon Zell.

Historical Description by the Artist:
The Green Man is an archetypal form of the God of Vegetation. He is known by many names all over the world and throughout history. He has been called Jack-in-the-Green, Atthys, Adonis, Lono, Xipe, Dionysus and most anciently Tammuz. Tammuz was the Sumerian Green Man, lover of the Goddess Inanna. His story is the oldest agricultural cycle: He is born in the Spring, loves in the Summer, cut down at the Harvest, spends Winter in the Underworld only to be reborn once more in the Spring. It is the same tale as the English folksong of John Barleycorn. Like the Egyptian green-faced God Osiris, these gods are all associated with the brewing of beer.

The most direct predecessor of the Green Man or foliate face is the Mask of Dionysus, used in classical Greek religious dramas. These were hung on temples as antefixes to guard from hostile influences. Dionysus, called Bacchus by the Romans, was the God of the Vine, crushed to death to make wine, “the blood of the God.” This symbolism was adopted into Christianity with the sacrament of communion. Another influence, the pre-Christian Celtic cult of the head, produced leaf and interlace stone faces for monuments. The Dionysian mask/antefix and the Celtic leaf head fused in the artforms of the Dark and Middle Ages and became a major symbol used by stonemasons to decorate the cathedrals that proliferated throughout Europe.