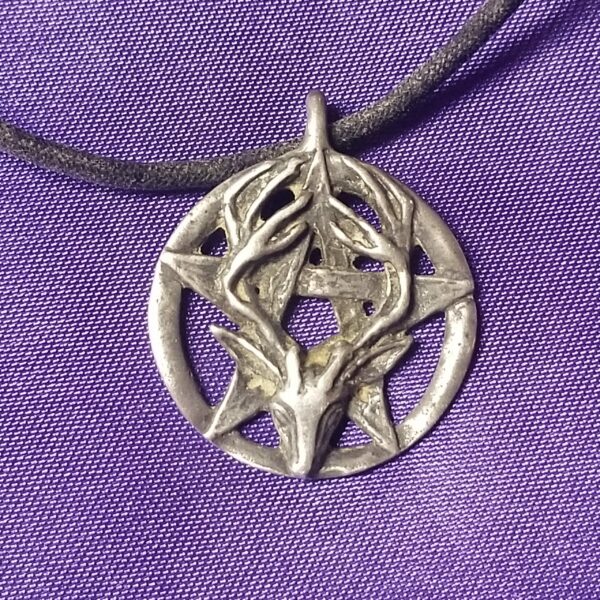 Cast from antiqued pewter, the Stag Pentagram evokes the grace and power of the Lord of the Wild Hunt. Comes with a black woven cord, which can be tied to your preferred length.

The Stag is a symbol of pride and independence. The Stag is aggressive and sexual, but also intuitive, dignified and adaptable. The Stag is seen as possessing the spirit of both a warrior and a provider, because its meat and hide has nourished humans for millennia.

There are many legends in which a stag lures a king or hunter into the forest to a new adventure—thus, the Stag is regarded as a gatekeeper to the wild world. People who have the Stag as a spirit animal tend to be vigilant, sensitive, independent and noble.

Pentacle Symbolism
The pentacle is an ancient symbol with many varied meanings.  In modern Paganism, the pentagram, or five-pointed star, is said to represent the four elements united by Spirit.  The pentagram is also an emblem of Man, with the five points representing the five senses and five points on the human body (head, arm, and legs). When enclosed in a circle, it is called a pentacle and symbolizes completeness, balance, and perfection.

The pentacle has always been regarded as a strongly protective emblem. In medieval times it was used to ward off evil spirits and magicians still use it to banish unwanted forces and energies.  Many Wiccans and other Pagans use the pentacle as a protective seal or as a symbol of their faith and place in the Universe.

Be the first to review “Pentagram Stag Necklace” Cancel reply