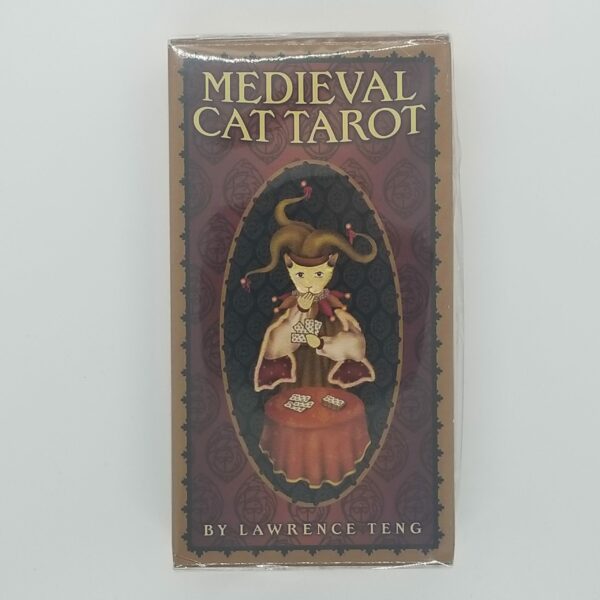 The glory of felines is celebrated with Renaissance flair! This ornate deck seeks to bridge the gap between past and present by blending classical and contemporary ideologies along with artistic styles. The result is an aristocratic deck with a humorous twist. Includes 48-page booklet of instructions.

“Medieval Cat Tarot marries rich esoteric symbolism with truly wonderful artistic styling and expression. While there is a definite theme to the illustrations on the cards, this is not merely a collector’s deck. Each card’s meaning is rendered in a heartfelt but simple way so that anyone can appreciate and understand it. One need only seek to identify with the players in the drama acted out on each card. The characters on each card are shown either in the act of, or participating in, behavior and situations which describe the truest meanings of the card as it is understood in a more universal way, based upon the Golden dawn symbolism as interpreted by A.E. Waite.”
— Lawrence Teng, Introduction to Medieval Cat Tarot

Mr. Teng lives in Richmond, B.C. a coastal region of Canada close to Vancouver. He reads Tarot as a hobby, preferring to use the modified Celtic cross as a layout.

Be the first to review “Medieval Cat Tarot” Cancel reply