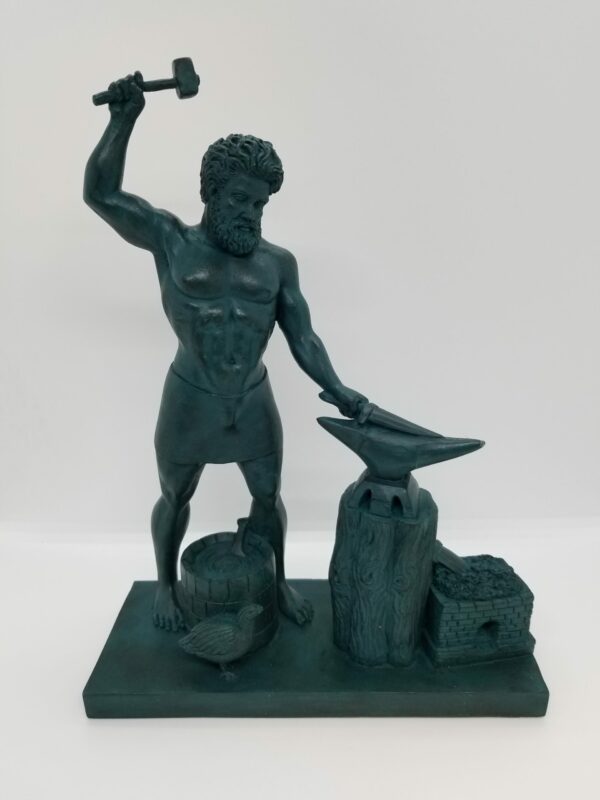 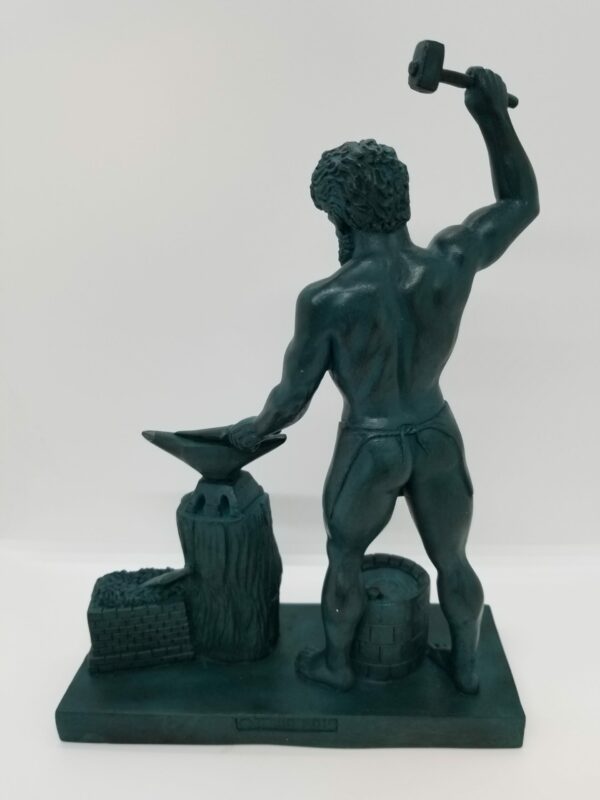 Hephaestus is the son of Zeus and Hera and married to Aphrodite, the goddess of love. His Roman name is Vulcan from which we get the word volcano.

Hephaestus, the god of fire, was known to be a great blacksmith who created wondrous, magnificent works. Some of them were the golden chariot and the golden cups for the sun-god Helios, a golden shield for the heroes Heracles, Achilles and Diomedes, the scepter and the throne of Zeus, as well as bows for the twin gods Artemis and Apollo. Up on Mount Olympus, Hephaestus built a bronze palace for the gods and crafted golden robot-like statues to serve him. Those statues looked similar to young women and had their own voice, strength and thought.

He is the only Greek deity who is physically ugly and lame. When his mother Hera saw him for the first time, she rejected her son and threw him from Mount Olympus to the depths of the sea, causing a deformation to his leg. Hephaestus was finally rescued by two Nereids, Thetis and Eurynome, who raised him for nine years inside a cave, far away and hidden from his cruel mother. Hephaestus had his revenge by crafting an amazing throne for Hera which trapped her in its seat. He refused to release her until Dionysus caused him to become drunk on wine and hauled him up to Olympus on a donkey to do so.

In the Iliad, Thetis had Hephaestus forge new armor for Achilles. And in the Aeneid, Venus asked him to forge armor for her son Aeneas. His workshop lay beneath the crater of the volcano of Mount Aetna in Italy. There, he worked closely together with the one-eyed Cyclopes to create strong thunderbolts for his master Zeus. Hephaestus was also famous for having crafted the first woman of the ancient world, Pandora.

Hephaestus aided in the birth of his sister Athena by splitting Zeus’s head with a mallet to allow her to spring forth fully formed. The adultery of his wife Aphrodite made him so angry that he trapped her with her lover Ares in a carefully made golden net for all the other gods to see. But his lust for and attempted intercourse with Athena resulted only in the impregnation of Earth by his spilled seed.

The cult and Mystery School of Hephaestus was on the island of Lemnos. His biblical name was Tubal Cane and the Ancient Vedic Texts refer to him as Vishya Karma. In Egypt he was identified with the god Ptah. The Norse knew him as Wayland the Smith. His sons, the Kabeiroi, or three mighty men, were also worshipped in Lemnos as well as the neighboring island of Samothrace.

To men, Hephaestus was a very kind and loveable god. He taught glorious crafts throughout the world including metalworking, stonemasonry, architecture and sculpture, and along with Athena brought civilizing arts to mankind. Prometheus stole the fire he brought from heaven and gave to mankind from Hephaestus’ Forge.

Be the first to review “Hephaestus Statue” Cancel reply