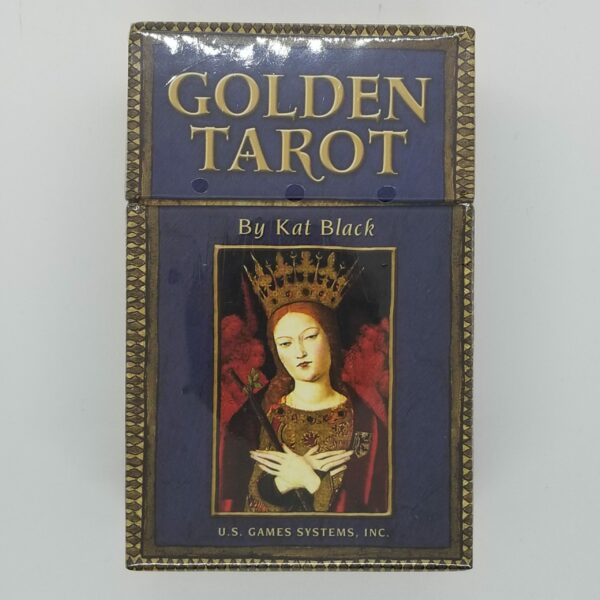 Kat Black has created a sumptuous tarot deck using a sophisticated collage technique that brings new luster and meaning to the European masterpieces she has assembled for this special deck. Each painting been meticulously researched and chosen specifically for its divine evocations.

While her deck remains true to the original Rider-Waite traditional symbolism, Kat Black offers accessible tarot interpretations that are fresh and welcoming. The cards are treated with gilt edges and are presented in a deluxe display box. The card backs’ repeating patterns are symmetric, allowing for reversed readings.

Golden Tarot comes with an illustrated 198-page book, which provides discussions of the artwork, descriptions, and interpretations for both upright and reversed meanings. An appendix identifies the sources for the artwork incorporated into Golden Tarot.

“From a time of violence, pestilence and oppression came poignant images of gentle beauty and human frailty.

They speak to me of a truth that is timeless, and hope that flowers even in the darkest conditions. I hope that they also speak to you.”

Be the first to review “Golden Tarot” Cancel reply