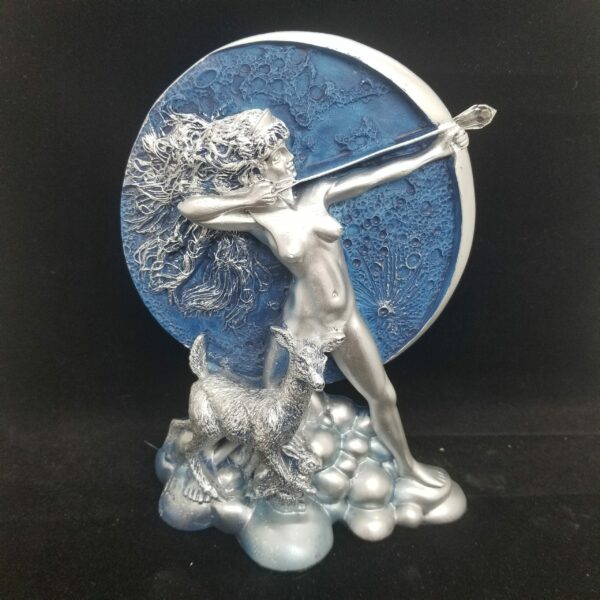 Diana “Lovely Maiden of the Bow”

7.5″ tall with silver and blue finish.

Historical Description by the artist:
One of the most enduring of the great Classical Goddesses, Diana is the Roman name for the Greek Goddess Artemis. Diana is a lunar divinity dedicated to the waxing crescent. She has many titles: Maiden Huntress, Mistress of the Beasts, Queen of the Night, Lady of the Grove. She is one of the virgin goddesses who was first and foremost a women’s goddess. She never married and preferred to roam the woodlands with Her retinue of nymphs and forest creatures. All young animals were sacred to Her as She was their protector. Her favorites were bears, deer, hares, cats, hounds and other animals and birds associated with the Moon.

Originally, Diana was associated with Great Mother goddesses of Asia Minor, such as Cybele. One legend says Her famous temple at Ephesus was originally built by the Amazons around a wooden image adorned with a black meteoric stone. Later, wealthy King Croesus rebuilt it into one of the Seven Wonders of the ancient world. Her early association with the Great Mother gained Her a reputation as a midwife and nurse. By the time She was included in the Greek pantheon She was said to be the daughter of Zeus by Leto and the sister of Apollo.

By Roman times, Diana had become the patron goddess of the underdog in many ways. Women, children, baby animals, eunuchs, lesbians, slaves and outlaws were all Her special charges, though She remained steadfastly a virgin and no man could enter Her temple on the Aventine in Rome. However, in Ephesus, Her priestesses were gradually replaced by eunuch priests until, by the time it was destroyed by Christians in the 7th Century CE, women were no longer allowed inside the temple even to make offerings! Diana was so beloved by society’s underdogs that even after Her worship was forbidden under penalty of death, She became the secret rallying goddess of those affected with the Roman Catholic Church.

Thus it was that Diana became the Goddess of Witches during the Dark and Middle Ages in Europe, and many a woman burned at the stake died with the name of this goddess on her lips. In fact, for over 400 years, little girls could not be christened with the name Diana, such was the fear She inspired in the hearts of the Church Fathers! Oberon’s exquisite modern interpretation of Diana was actually inspired by the final scene in the Pastorale portion of Walt Disney’s “Fantasia.” Night has fallen and the Maiden Huntress steps out onto a silvery cloud. Bending the crescent bow of the new moon in her hands, she fires a meteoric arrow which steaks across the starry night sky.