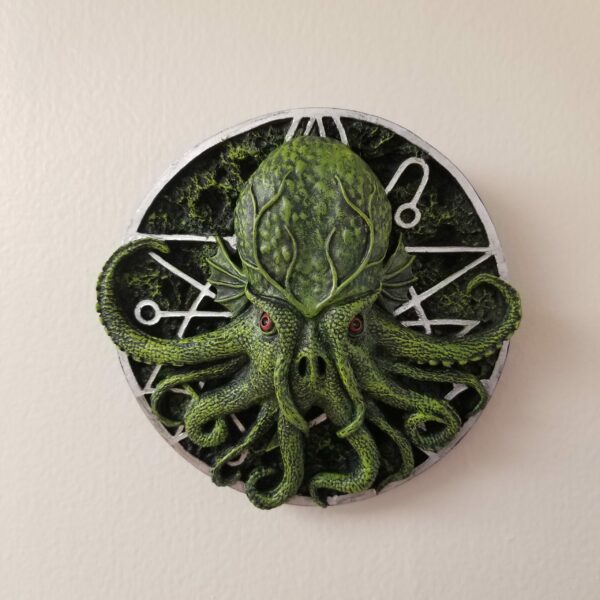 Lovecraftian plaque measures 5.25″ across and comes with a hanger.

Historical Description by the Artist:
In the “Cthulhu Mythos” of fantasy writer H.P. Lovecraft (1890-1937), the Universe is ruled by beings known as the Elder Gods, Outer Gods, or Other Gods. Only a few of these are known by name; the majority are both blind and idiotic. They are controlled to some extent by their messenger and soul, Nyarlathotep, and are immensely powerful. Azathoth, the daemon sultan and ruler of the cosmos, writhes mindlessly to the piping of a demon flute at the center of the universe. Yog-Sothoth, either a second-in-command or co-ruler, is coterminous with all time and space, but locked somehow outside the mundane universe, and can only be summoned to this side through the use of mighty spells, whereas Azathoth theoretically might be met simply by traveling far enough through space. A group of the Other Gods dance slowly around Azathoth, but none are named. When troubles arise, these deities are discomfited, which sends Nyalathotep out to investigate. All the races and lesser deities of the Mythos acknowledge the Other Gods, and many worship them.

Under the Other Gods in power, though not in importance, are the beings known as the Great Old Ones. The Great Old Ones appear to be immensely powerful alien beings, rather than true gods in the sense that the Elder Gods are. Each of the Great Old Ones is independent of the others, and many seem to be temporarily imprisoned in some way. It is said that “when the stars are right” the Great Old Ones can plunge from world to world, but when the stars are not right they cannot live. “Cannot live” does not necessarily mean death for one of this group. The Arab Abd al-Azrad wrote the following couplet in his work “Kitab Al-Azif” on this subject:
That is not dead which can eternal lie,
And with strange aeons even death may die.

The most famous creation of Lovecraft is a Great Old One, Cthulhu himself. Cthulhu, with the rest of his race (the “Spawn of Cthulhu”), is at present imbedded in a vast tomb at the bottom of the Pacific Ocean. He seems to be the most important Great Old One on Earth. Others exist of different races, but they seem to be both less powerful and freer. Ithaqua the Windwalker seems to be more or less free on Earth, but restricted to Arctic latitudes. Hastur the Unspeakable dwells near Aldebaran and Cthugha near Fomalhaut. Other Great Old Ones doubtless infest other worlds, and it may be common for a world to be ruled by dominant Great Old Ones. All the Great Old Ones known on Earth are often invoked and/or worshipped, but Cthulhu is evidently worshipped more than all the other denizens of the Cthulhu mythos put together.
After the Great Old Ones come a host of minor deities and beings such as Quachil Uttaus, the Treader of Dust; Fthagghua; and similar beings. These entities usually have no worshippers, but wizards may know spells to summon them. They fill the role of “demons” in the mythos.

Lovecraft has described Cthulhu thusly:  “…simultaneous pictures of an octopus, a dragon and a human caricature… A pulpy, tentacled head surmounted a grotesque and scaly body with rudimentary wings… A monster of vaguely anthropoid outline, but with an octopus-like head whose face was a mass of feelers, a scaly, rubbery-looking body, prodigious claws on hind and fore-feet, and long, narrow wings behind. This thing… was of a somewhat bloated corpulence… It lumbered slobberingly into sight and groping squeezed its gelatinous green immensity through the black doorway. …A mountain walked or stumbled.”

Be the first to review “Cthulhu Wall Plaque” Cancel reply