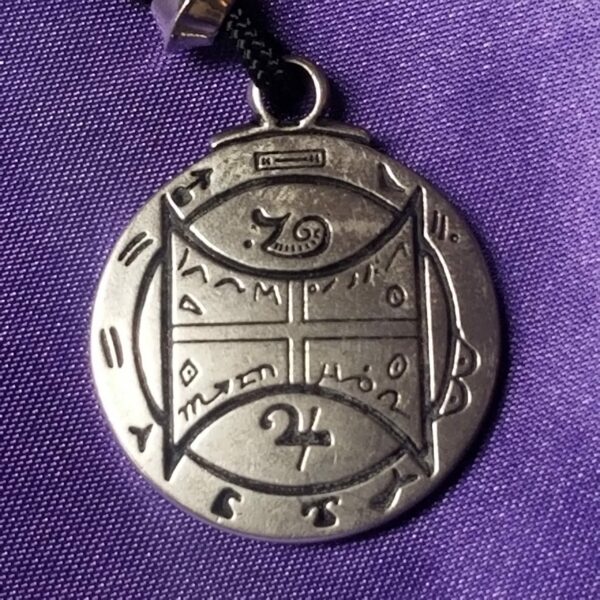 Approx. 1″ diameter, with pewter bead on cord. Comes with 30″ cord.

Cast in Lead-free Pewter in the USA by American Crafts People.

The Communication with Animals is found in “The Black Pullet,” a book of Magical Talismans dating from the time of Napoleon’s incursion into Egypt.

The legend states… An officer in the army of Napoleon was sent on an expedition to the Pyramids. In the shadow of “The Grand Colossus” they were attacked by a horde of “Arabs of the Desert”. In a fierce battle all were slain save the brave officer, who was mortally wounded. He thought the end was near when, “suddenly a stone rolled back in the Pyramid and a venerable man issued forth.” The Sage took him inside of the Great Pyramid where “there were vast halls and endless galleries, subterranean chambers piled with treasures, apparitions of blazing lamps, ministering Spirits innumerable…..” After gaining the confidence of the Ancient Sage, the officer was made apprentice and was taught “in the powers and wonders of twenty two Talismanic figures and the Rings corresponding…”

This Talisman for Communication with Animals enables the bearer to understand the Language of Animals. It also gains the bearer an immunity from attack of any Ferocious Beast. It enhances Psychic Bonds with Animals and promotes understanding of their body postures.

Our designs are found in various Magical Grimoires that we have in our private library. Often the various Magical symbols are so ancient that their origins are lost. Since we must trust the source, we cannot guarantee any Magical Powers and must also state that we sell these for novelty purposes only. It is up to you to provide the Magick!!!

Be the first to review “Communication With Animals Pendant” Cancel reply